Its time to determine your future...!!!

January 03, 2014
This post is a part of Indian General Elections 2014 with Social Mobile Apps
contest, conducted by IndiBloggers in association with WeChat

Everyone will concur with the two subsequent facts. First, that in this era of computerization, the social media and apps play an imperative role in promotion and condemnation of any issue or product. Second the same media and apps have become an inextricable part of youth's life. The first thing we do before leaving our bed in morning and closing our eyes at night, is to check updates on social media. Even in the hustle and bustle of crowded cities, one will positively find college students or newbie employees walking down the road, eyes and hands both engaged on the phone's screen. Somehow the dominance of these apps in our lives have become inevitable.

On benevolent side of the coin, these apps have proved themselves capable of bringing an active support and contribution of youth in politics and other contemporary issues. The phenomenal victory of AAP in Delhi elections lawyer-ed it all. Whether it was supporting an 82 years old man, in his protest against the government or standing day and night on Rajpath for the justice of  a rape victim; youth has been the paramount weapon in every crusade. So it becomes extremely significant to channelize their exuberance and angst in right direction.

According to an article published in The Business Line, the youth interest have risen in politics, though it is not reflected in direct participation, such as voting and joining a political party. But it has to alter this time as a huge youth voter turnout is much required. Another line of the same article states that "If politics determines your future, then it is time you determine your politics." According to the census 2011, there will be 12 crore first time voters in 2014 Lok Sabha elections. If we will fail in bringing the involvement of this myriad number of youth in upcoming elections, then undoubtedly India has to suffer through the same old fashioned political aftermaths for next 5 years again.

The best we can do to change the scenario is to develop a faith in youth that only their active participation that can bring the much awaited change. The social apps can prove themselves the best bridging element between the two. The whole political platform could be brought a little more closer to the youth through this. Political parties can convey their agendas to the youth, and can seek their responses. The former can make the later feels like that they involvement is pre-eminent as the government is for them, and by them. This practice could be seen on facebook and on twitter where parties form a page and update information regarding their activities. But little do they care about what actually the youth feels about it. Youth must comprehend what an extensive potential they have.

Using social apps like the WeChat, messages and video notes can be spread to tell the youth, about the circumstances, they have to face if they'll not vote in upcoming elections. The short video clips are very popular among people in such apps and could be spread with great speed. Obviously after being an educated citizen of this huge democracy, they are aware what their votes can change. Now they have to be made aware what their not voting can change. And the best part is once the information a out there, it will not cease at once place or person. It will flow like an uncontrolled river washing away the pebbles of ignorance and irresponsibility.

Several apps can be developed to display the change they could brought with the power of their votes. An app like the one which count downs till the voting day, and everyday give them a short message about how much a single vote matters for the sake of whole country. Another app which shows how choosing a political representative can bring effective change in society, and many more.

Some games can also be worthwhile. They not only grasp the mind at that particular moment when they are being played but also kept cling in the brains afterwards. In general games, where a warrior fights the devils to save his love, here one will fight the devils to reach a polling booth and caste their valuable vote.

The social apps can start a mission and call the youths to join it. Using the slogan of more the merrier, they can ask the youth to bring their friends to join the mission and spread this motto. For this they could get some points which will help them to acquire some privileges like free balance or a paid service for a limited time period, without any cost.

4) Your Friend Voted, And You?

I myself being a 22 years Indian youth, believes that voting is a responsibility, but more of a duty. Still there could be many circumstances where I can less prioritize it. In that case there has to be something, which pushes me to leave everything behind and vote for the sake of my country.

If any of my friend checks-in a polling booth, the social app should send a message to everyone on his/her list saying, "I voted, and gave my contribution to a bright India. Did you?" Definitely such message will let me ponder about whether what I'm doing right now is more important than voting?

Another trick the social apps can play is seeking some polls or opinions about ameliorating the current vandalized politics. If they can come up with some amazing ideas, they for sure would love to see them getting implemented. This will definitely make them a little more intriguing toward using their vote right.

Those who are going to vote for the first time are in general very excited about using their right. But once they are done and they lose interest. They should be provided with the relevant information, what change they could bring. They should be told that the key to a better India is in their hands and it should be used legitimately throughout their life.

One of the most attractive features of social apps is the emotions they use. Everyday they are getting more interesting, appealing and dynamic. Introducing some emotions displaying, 'I will vote' or 'I am responsible' or 'I voted' could be obliging.

This is a general conception that nothing gonna change in this country. But this is the only thought that needed to be changed. There must be several unanswered questions in their minds, which they want to ask their leaders. Social apps could lead their voice. They can conduct a contest in which the most striking 10 questions will be put in front of the particular political leader, which they have to answer for sure. May be getting the answers to their questions lit a candle of hope in their hearts.

There is no doubt that the social apps are capable of molding youth's brain. History has many instances which can prove this. The politics of India is facing a formidable phase and is demanding a break-though. Hope we witness a change in participation count as well as political picture of India in 2014 elections. 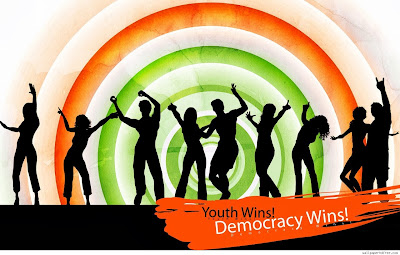